What PAIL Month Means to Me

On October 2nd, 2018, I heard the four most devastating news a mother could hear.

“There is no heartbeat.”

My husband and I had gone to a routine ultrasound, excited to see our firstborn son on the screen. I still remember how we held hands and laughed as we strolled through the parking lot and into the building, but we left the hospital solemn and confused. How could something like this happen? And what was even more confusing was realizing that our baby still had to come out. I asked the doctor, so what do I do now? And she said, “We will set up a time for you to deliver your baby.”

The next day, on October 3rd, 2018, my son Steven was born. He was born at 2:25 am and was 8.5 inches long, weighing 5.7 ounces. We spent a day at the hospital holding him, loving him, and doing our best to remember everything about him before he was rolled away to be cremated.

The following weeks were a blur as I was consumed with the raw grief of being a mother without her son in her arms. For months, I blamed myself and my body for failing at what it was supposed to do, even though all the tests and blood draws revealed nothing out of the ordinary. Steven’s death was a total mystery. In fact, the results were so “normal” that my provider said I wouldn’t even be considered high-risk if I were to get pregnant again.

October is always a somber month for me, not just because it begins with Steven’s death and birth day, but because it is also Pregnancy and Infant Loss (PAIL) Awareness Month. The year I had Steven was actually overwhelming because there were so many other loss moms who opened their arms up to me and welcomed me into this terrible club. I remember getting invited to several walks and events to commemorate our babies, but my experience was way too fresh and I didn’t feel ready to show up to any of them.

What PAIL Month did offer that first year, though, was a lot of empathy and comfort for me because I was able to see so many other parents share their experiences. I felt like there were finally people who understood my feelings and exactly what I was going through, and at the beginning of my grief journey, that was exactly what I needed.

Since Steven died, I have met so many other moms who have experienced pregnancy and infant loss, whether through miscarriage, stillbirth, SIDS, or other unfair reasons. And October is a month that amplifies our voices and gives us space to share our children with the world, which is usually treated as taboo and labeled with “trigger warnings” the rest of the year. And even though October is a month dedicated to raising awareness, it’s still one that makes people uncomfortable. Because no one wants to talk about babies who died. But is it fair for loss parents to be limited to one month of sharing their experience and babies with the world?

It’s only been three years since Steven died and I live with him in my heart every day. Maybe that sounds comforting, but it’s not. Because what it really means is that I live with his absence every day. It means I constantly want to hug and hold him, but I can’t. It means that I often wonder what he would’ve been like, how he would’ve cried or laughed, and what kind of personality he would have, but I’ll never know. And these feelings don’t just exist for a single month of the year. It is my every day. And although my grief has evolved over time, even though some days are better than others…it will be this way until my last breath on this earth.

Although I have a child you can’t see, I still carried him and birthed him. I will always love him. And like any parent with living children, I love having opportunities to say his name (and hearing others say it, too!) So I’ve realized, October is not just a time for me to share about Steven, but it’s also a month for me to model what it’s like to honor him and celebrate him, not just as a baby who died too soon, but as my son. It’s a month for me to show others that it’s okay to talk about him.

Of course, every parent is different. Some may not feel comfortable sharing their story yet. Maybe the grief is too raw or they are feeling protective of their story. And that’s okay. But I don’t think this month is just for loss parents – it’s not a month demanding us to share. Rather, it’s also a month for non-loss parents to reach out and ask, “What can I do to honor your child? What can I do to keep their memory alive?” It’s a month for non-loss parents to listen to the stories that are being shared. And it’s a month for everyone to learn that it’s okay for grief to be out in the open.

One really great way to participate in Pregnancy and Infant Loss month is by joining me and my fellow loss parents in this year’s Wave of Light. The Wave of Light is a globally recognized ceremony that happens every year on October 15th at 7 pm in your local timezone. We will light a candle for all the babies who have died too soon. You can even take a photo of your candle and post it to social media in solidarity using the hashtag #WaveofLight.

Yes, the death of a baby who is very much loved and wanted is an extremely sad thing. There is no way to sugarcoat it. But just because Steven’s death was sad doesn’t mean his existence was sad and it doesn’t mean I love him any less than if he were living. So for parents who have gone through the unimaginable, I see you. I see you and I grieve with you and I am with you. And for those who haven’t experienced it, I invite you to remember my son, and all the other babies lost too soon, and to honor their lives and say their names with me, not just for the month of October, but forever. 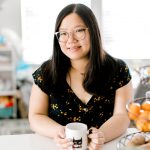 Justine has been blog writing and content creating since 2017. She runs quality control on content so that it is easy to read and understand. She always keeps an eye out for typos to ensure our clients look and sound professional.

More from our blog

Read our most recent